My thought for today is something which I found in Epicurus (yes, I actually make a practice of going over to the enemy’s camp – by way of reconnaissance, not as a deserter!).

Aristotle's view of emotion was more moderate than the Stoics. In his view, negative emotions like anger can be appropriate. In fact, in some cases, it would be inappropriate to fail to be angry. In On Anger, Seneca tells the story of Stilpo whose town is burned down by Demitrius. The town included Stiplo's partner and children:

Demetrius, upon the taking of Megara, asked Stiplo, the philosopher what he had lost. "Nothing" said he, "for I had all that I could call my own about me." And yet the enemy had then made himself master of his patrimony, his children, and his country; but these he looked upon as only adventitious goods, and under the command of fortune.

Imagine someone hurting who you love. Failing to be angry would indicate that you didn't love them to begin with. So, in some cases it's better to be angry, so long as it is the right degree, for the right reason.

This view is in tension with the Stoic and Buddhist view of emotions. For the Stoics, negative emotions like anger distort reason and are the result of false judgements. For the Buddhist, they are manifestations of craving and confusion.

Sometimes, followers of these philosophies seek to completely eradicate both negative feelings and emotions. This would be a foolish venture. Negative emotions serve an important purpose. To get a sense of this, consider the following: are children who fall from a ladder more likely to be afraid of heights or less likely? Answer: they're less likely to be afraid of heights than children who never fall from ladders. The children who don't fall used their fear to act prudently.

This shows how negative emotions like anxiety can be advantageous. If Icarus had been more anxious, he would have lived.

Stoics and Buddhists who interpret their philosophies as completely removing the negative risk getting singed. This isn't to say that all versions of Stoicism and Buddhism have this problem. But with Seneca we can say that it's valuable to go behind the enemy camp and take what we can learn.

Let's consider this from the standpoint of evolution. We know that humans have evolved. Through the process of natural selection, traits that condone fitness are increased and those that don't fall out of the system. It's likely that this process includes not just physical traits, but apparently mental traits as well, such as systems that produce emotion. What is an emotion?  "Emotions are specialized states that adjust physiology, cognition, subjective experience, facial expressions, and behavior in ways that increase the ability to meet the adaptive challenges of situations that have recurred over the evolutionary history of a species."

Our emotional systems are shaped by a long process of reproduction, variation, and selection. With this theoretical backdrop, we can ask what the role of negative emotions like sadness, low mood, and anger are. How did they, or the system that gave rise to them, promote our fitness?

It's been hypothesized that anxiety and fear play the role of a smoke detector. If you purchase a smoke detector, you'd prefer one with a tendency for false positives rather than a tendency for false negatives. That is, you'd prefer one that goes off even if there's no fire to one that is silent when there's a fire. If there's no fire and alarm is blaring, you're annoyed. If there is and the alarm is silent, then your house may burn down or worse. It's better to be annoyed than lose the house! Anxiety serves as a smoke alarm for you and your loved ones. Even when it is well-tuned, it may go off when the objective risk of danger is low. We're wary of rustling in the bushes even when typical cause is friendly. This is because humans who were alert to the rustling, paranoid even, faired better than those who were not. Returning to the ladder example, fear of heights was advantageous because it predicted not falling. In a more dangerous environment, where the risks of falling were higher than merely falling off a ladder, the selection pressure for fear of heights would be stronger.

When you're afraid, you're less likely to make reckless mistakes. Further, you're more likely to fix outstanding problems early. If you're anxious that your business will fail, you can take steps to prevent it. If you're too cocky, your business may fail. Of course, you can be too anxious or afraid -- the opposite of recklessness is cowardice. Serious anxiety disorders can be crippling. Why they occur is an interesting question.

Feelings of nervousness needn't always be accurate in order to promote fitness. For Stoics, emotions are judgements. Someone who thinks that most spiders are dangerous, even when they aren't may make less accurate judgements than someone else, but if the other person is just a bit reckless, the one prone to arachnid paranoia will survive longer.

Similar cases can be made for sadness and anger. Sadness may be linked to the amount of opportunity in an environment. When you're optimistic, you're acting on the assumption that your effort will be rewarded. You'll feel more energetic and be more likely to expend that effort. When you're pessimistic and feeling down, you're more likely to contract and save your effort. Sometimes that will be reasonable. When you're angry, you're more likely to be motivated to defend yourself from others. There's a sense in which you may be rational, but that can be advantageous. If you're more irrational, you're less predictable and potentially less likely to be manipulated. These hypotheses are not set in stone in any means, but they are existence proofs of the main idea.

However, I am arguing that the evolutionary backdrop shows how negative emotions can sometimes be useful. Not only do they serve our genes, they also serve us on occasion. Anxiety is a servant of prudence, sadness an indicator of propitiousness, and anger can be fuel for standing up for our rights. The work in evolutionary psychiatry and psychology illuminates how and when different parts of our mental machinery are useful.

Our evolutionary machinery isn't always useful for us. The environment in which we were shaped is different. Our taste for sugar may have been useful in the Pleistocene. It's less useful now. I expect anger is similar. Anger may have been more useful to express in small groups. It may not be useful to feel the rush of anger while staring at a computer screen in response to strangers who you will never interact with. Further, our machinery was ultimately meant to serve our genes not us. I know a number of exceptionally productive people, but their productivity derives from status anxiety. They are "haunted minds" in Seneca's language. Such anxiety may serve their genes, but it may be worse for them overall.

However, these points are not sufficient to defeat the argument. As it stands, it may sometimes be useful to experience negative emotions. So what should a Stoic make of this?

I won't completely answer the question here, one way to start would be by distinguishing emotion from feeling. Margaret Graver has the following line:

The distinction between emotions and feelings therefore serves to open up an interpretive space around a central dictum of Stoic ethics. If the psychic sensations we experience in emotion are not simply identical with the pathe, then the norm of apatheia does not have to be cashed out as an injunction against every human feeling. One might be impassive in the Stoic sense and still remain subject to other categories of affective experience.

What matters is the judgement that is formed in response to the feeling. Feelings can become overwhelming and facilitate false judgements. When this happens, we can find ourselves in the grip of negative emotion. This is the account given by Seneca:

An emotion, then, does not consist in being moved by the appearances of things, but in surrendering to them and following up this casual impulse. For if anyone supposes that turning pale, bursting into tears, sexual arousal, deep sighs, flashing eyes, and anything of that sort are a sign of emotion and mental state, he is mistaken and does not understand that these are merely bodily impulses…. A man thinks himself injured, wants to be revenged, and then – being dissuaded for some reason – he quickly calms down again. I don’t call this anger, but a mental impulse yielding to reason. Anger is that which overleaps reason and carries it away.

In contemporary parlance, the Stoic view is metacognitive. It's not about vanquishing negative feelings, but changing how we relate to them. It focuses on responding to, rather than reacting to feelings. A Stoic can notice the usefulness of negative feelings and act accordingly.

This view allows for a wide range of affective experience. It explains why we feel uncomfortable with the story of Stilpo, whose behavior seems cold and unnatural.

Negative feelings have evolutionary roots and sometimes they benefit us. Whether we should be swept away by them is another matter. 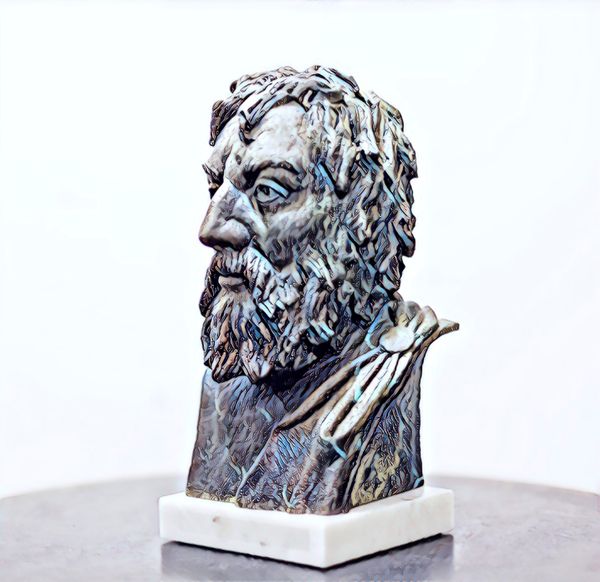 I've uploaded a new sequence in the Theory section of Stoa with Scott Aikin. Scott Aikin is a professor at Vanderbilt. He's currently authoring a book on Epictetus with William 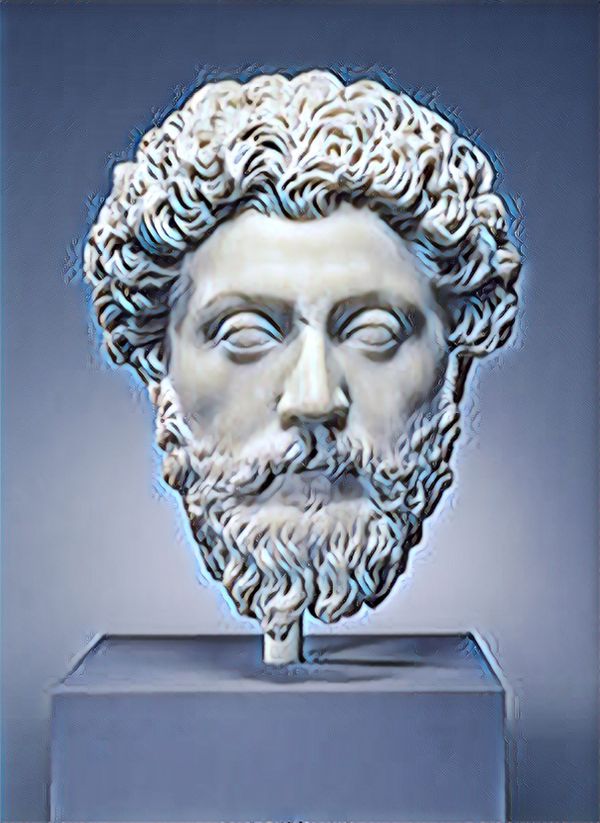 William Stephens, a is a Professor of Philosophy at Creighton University, is a first-rate scholar of Stoicism. We recently recorded a few short clips explaining Marcus Aurelius' thought and life